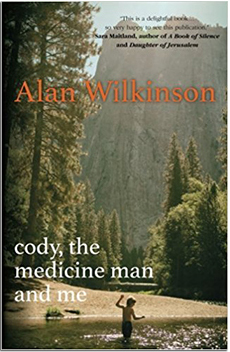 Cody, The Medicine Man and Me

Twin brothers Ray and Luke West grew up together in a monochrome post-war Britain dazzled by images from the American West. Bronco Lane, Matt Dillon, Rowdy Yates, The Lone Ranger – they were on TV night after night. All the games the boys played were inspired by fantasies of a life on the open range. And then along came their American Uncle Bill, telling them they were related to Buffalo Bill and Lakota medicine man Black Elk ‘in a manner of speaking’.

For Luke this is just an old man’s fantasy. For Ray it has the ring of truth. Why else does he feel that deep down he has the soul of a cowboy? Or is it an Indian? Thirty years later, it’s no surprise that Luke is living in Wyoming building log homes for the wealthy and making piles of money. But why is Ray, an academic in the field of  western literature, hanging out in a Nevada brothel with a bunch of rodeo riders? All these questions swirl around in Ray’s head as he sets off to locate a parcel of land Uncle Bill won in a card-game – a ghost town high in the mountains of New Mexico. Both of the brothers are in for some surprising revelations as the book reaches its climax, and they head for a showdown.